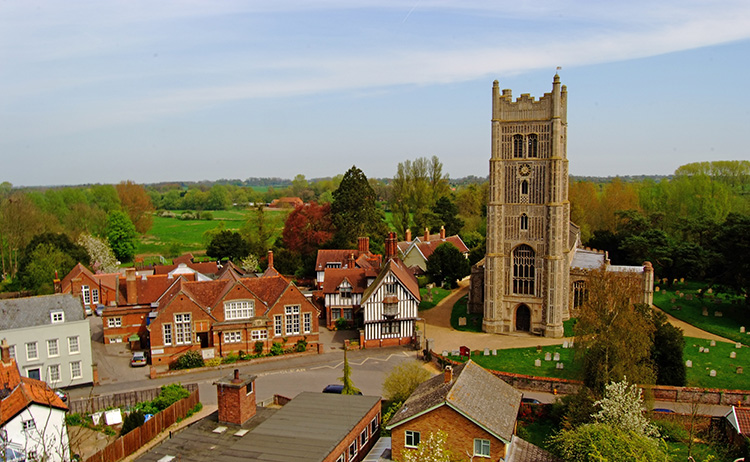 Explore and drink in this glorious church’s picturesque setting in a quiet corner of its vibrant Suffolk market town. Climb up to the Castle Mound opposite and enjoy one of the most stunning (and photogenic) views of a church in its surroundings to be seen anywhere in East Anglia.

If you love historic buildings

There’s living history here, where Christians have worshipped for maybe 1000 years. The south doorway is some 750 years old, the arcades, also the tomb recess in the north aisle date from the 1300s, the tower, porch and most of the windows, the tower and the porch from the 1400s, two tombs from the 1500s, a brick dole-table from 1601 – and there’s work here from every century since then, including our own.

If you love medieval architecture

This is a premier church in a county of fine churches. The 101ft tower, with its array of elaborate flushwork, grand stone parapet, noble polygonal buttresses, etc., is a masterpiece of c.1450-88, displaying John De La Pole’s arms, as does the two-storeyed south porch, which has superb 15th century stonecarving. The south doorway has Early English dog-tooth and stiff-leaf carving which is 200 years older. The fan-vaulting beneath the tower, the pinnacled, cusped and crocketed tomb recess of the 1300s, the south chapel parapet of Tudor brick and terra-cotta are just some of the architectural details to be savoured here.

If you love medieval art and craftsmanship

You will want to be ‘prone on a pew’ in order to enjoy the 15th century arch-braced nave and chancel roofs, with a (repainted) canopy of honour to the rood. Then there is Eye’s magnificent rood screen – one of East Anglia’s finest – work of c.1480 up as far as the underside of its loft and with 15 exquisitely painted ‘Old Masters’ of saints (including three English kings), with the emblems that identify them. It’s worth getting on your knees to have a careful look at these intriguing characters, which were wonderful visual-aids to teach the Faith to medieval people.

If you love memorials to people of the past

You will not find a church full of monuments, but there are two almost identical 16th century altar-tombs, fashioned in Purbeck marble. One at the west end of the north aisle is for Nicholas and Elionora Cutler (died 1568 and 1549) and the other, in the Lady Chapel, commemorates William Honyng, who died in 1569. Wall plaques in the sanctuary commemorate the Revd John Wythe, Eye’s vicar for 50 years, who died in 1835 (north) and the Naval Surgeon John Brown, who died in 1732 and whose memorial has a carving of the Good Samaritan (south). Various ledger slabs in the floors tell of Eye worthies who have been part of this church and town. Maybe the most moving memorial is Comper’s east window, in memory of the Revd John Polycarp Oakey, who died in 1927 and who is seen, vested in his cope, kneeling at the feet of S. Polycarp in the southern light. Nearly 1,900 people subscribed to this window at the request of his close friend (and the Patron of the Living), Miss Maude Tacon of Brome Hall.

If you love 19th century design

You will appreciate the results of the sensitive 1867-8 restoration, to the designs of James Kellaway Colling (who also restored nearby Hoxne, Oakley and Bedfield churches and designed the Kerrison Memorial in Broad Street). He restored the roofs and renewed the south aisle roof. He redesigned and rebuilt the east wall of the chancel and designed the present seating and the font.

If you love the work of Sir Ninian Comper

There is a feast for you here! In the 1920s he added the sumptuous rood-loft and on its parapet he placed the great rood crucifix, the figures of Our Lady and S. John and a pair of six-winged seraphim. Comper re-ordered the sanctuary, although it has been altered again since then, but his beautiful sanctuary lamps have survived. He designed the war memorial plaque in the south aisle, the glass in the great East Window and in the north-west window. Finally, in 1932, he created the graceful font cover.

If you love later 20th and 21st century work

You will appreciate the re-ordering of the chancel and sanctuary in 1969, to the designs of Stuart Milner, with woodwork in limed oak and the free-standing High Altar backed by a marble gradine and a dossal curtain. You will want to visit the Lady Chapel with its stone altar (with medieval mensa-slab) and hexagonal sacrament house, where the Blessed Sacrament is reserved. In the north aisle, the 14th century tomb recess makes a wonderful setting for Lough Pendred’s Shrine of our Lady, carved in wood in 1973. You may well be interested in the creation of the Abbey Room to the north of the chancel in 2009 and in what further exciting developments are planned for the near future.

You have come to a church where devotional and sacramental worship has developed over the past 120 or so years and with it have developed a fine musical tradition and a church building adorned as a place where heaven and earth meet. Here at Eye the furnishings and objects of devotion are tasteful and beautiful and lovely craftsmanship, ancient and modern, is designed to bring people to their knees. The Revd J. P. Oakey (vicar 1917-27) advanced the moderate catholic tradition established by his two predecessors and had a great ally in Miss Maude Tacon, a convinced Anglo Catholic, who became Patron of the Living. This continued under the Revd J. R. Vincent (1927-34) under whom Comper’s re-ordering was completed. Then came the long and faithful ministry (1934-66) of the Revd Donald Rea – a convinced Anglican Papalist, whose remarkable pioneer work in promoting dialogue between Anglicans and Roman Catholics did much to bring the two churches closer together. He became a personal friend of Pope John XXIII, who gave him his own personal breviary, and Pope Pius XII consecrated for him the stone mensa-slab which is set into the High Altar. Roy Tricker Candlemass 2010

Thanks to our supporters, benefactors and helpers, the church has acquired, among many new features, an assembly room and a magnificent historic organ, on which visiting international organists have performed. Our work continues. Our thanks go to all those whose support and generosity have enabled our church to flourish. On their behalf we would like to invite you all to visit Eye and its magnificent church… and to stay awhile to sample its worship, music and its welcome.

We also use Google Analytics to enable us to collect anonymous information about people visiting our website and the pages accessed.